Oswego Ridge was originally developed in the mid-1980's as an 82 unit apartment complex in the newly formed Mountain Park neighborhood.  The community was converted to condominiums in the early 2000's.  In 2015 the association decided it was time to complete long-term deferred maintenance and update the building exteriors.  This was driven by the functional need to replace weatherproof components as well the need to update the look and feel of the community.  I&E Construction was selected to carry out the project of replacing the entire building exterior.  This included the roof, windows, siding, and decks. 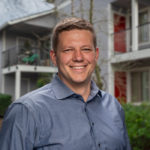